Back to top
News and Announcements 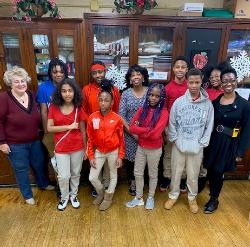 Chicago, IL- William Penn Elementary School in the North Lawndale neighborhood of Chicago has been educating the children of the neighborhood for more than a century.  The school and the neighborhood have suffered from urban blight in recent decades, but a newly completed project at the school is putting a new shine on the building.

On Friday, January 10, Principal Dr. Sherryl Moore-Ollie will officially open the newly built set of three restrooms in the school basement. Prior to this major construction project at Penn, students who used the unisex restroom were exposed to standing water on the floor from a leaking roof; lack of urinals for the boys’ use; algae and mold growing on the walls; foul odors; and sinks that worked intermittently.

In the spring of 2019, a group of Penn parents organized the William Penn Task Force to move forward the petition for a rehabbed restroom. William Penn PAC President Yolanda Williams and two student activists, Penn sixth graders Robyn Booker and Caseam MacDonald, petitioned the CPS board on May 23 to have the restroom rehabilitation project fully funded, which the board granted.

To complete the project, construction workers repaired exterior masonry and the roof, which was the source of the water leaking into the restroom.  The single unisex restroom was divided into three restrooms, one for staff, the second for girls, and the third for boys. Construction commenced in July 2019 and was completed in December, 2019.